Turkey is synonymous with Thanksgiving. So much so that the holiday’s unofficial nickname is Turkey Day, and American schools literally demand that children pay homage to the birds with their own precious little hands. Maybe we’re indoctrinating kids into this allegiance to poultry because the truth would turn the whole turkey industry upside down overnight: turkey isn’t such a great main dish.

I know this sounds like an attack on Thanksgiving itself. It’s taboo. It’s anti-American. I can hear the four people reading this running around yelling, “What are we supposed to do? to eat?!” I’m sure you think I’m an anarchist vegan who thinks we should all switch to Tofurkey instead (that’s not great either), but hear me out.

For starters, the obvious: Turkey is dry as hell. “But not mine!” some of you sound like a parent who insists your child is the smartest thing that ever walked. I believe you! (I don’t know.) A whole turkey is notoriously difficult to make juicy and tender, and the rare cook who can do this only accomplishes it after a top-secret ceremony that involves blood sacrifice as well as days of fasting. and prayer. Even an average turkey takes days thawing, brining, basting, and more to make it edible, assuming no one fried it, which produces more or less the same result but with the added risk of burning down the house.

If we’re honest with ourselves, we choose turkey every year not because we really like it, but because… it’s what we’re “supposed” to do.

Making a turkey is an act of love, but the end result is usually a shiny brown mound that’s crispy on the outside but requires several ladlefuls of sauce to make it satisfying. These simple, non-saucey morsels that take up so much space on plates are usually hard to chew – something experts attribute to the collagen-to-fat ratio, white meat cooking faster than dark, improper thawing, cooking too long, cooking too slow, and so on. Always excuses. No one has to do so much explaining with chicken nuggets. I say it like that.

Then there’s all the cutting and sculpting. In a twisted way, it can be an exhilarating ceremony, not least because deciding who Carving the turkey can intensify an otherwise boring dinner. A $50 turkey can make people act like they’re vying for the Iron Throne. Sculpting privileges can be Phone an ordeal, where gender, age, social status or perceived levels of achievement take precedence over common sense. Only inheritance and living will disputes cause so much family drama.

It is not rare to see a scenario where mum, who has spent two whole days cooking it, entrusts dad with the task of cutting… because he is the man (?). Or if dad isn’t available, that responsibility falls to the older man, unless of course the older son has a drug or gambling problem that has brought the family to shame. See typically righteous families travel back in time to embrace demotion leave it to the beaver-the patriarchal politics of the era on a clumsy bird (which attack you if given the chance, by the way) is pure comedy. No one does that on roast chicken! 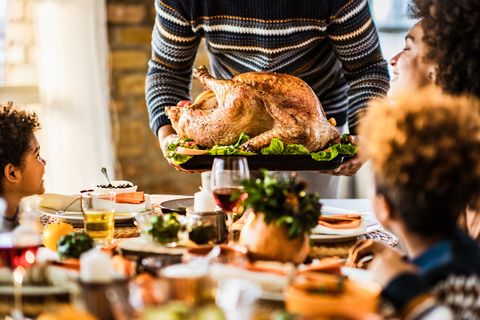 By all means, enjoy what you love, but know that you don’t need to be chained to the ritual for the pleasure of the ritual.

If we’re honest with ourselves, we choose turkey every year not because we really like it, but because… it’s what we’re “supposed” to do. It is tradition. Sure, enjoy what you love, but know that you don’t have to be chained to a ritual for the ritual’s sake: Many people have embraced Thanksgiving salmon. You could make lamb, or pork, lasagna or, of course, the zillion vegan and vegetarian options available. All delicious alternatives for those who want to slaughter the turkey.

Many of us agree that the best part of eating turkey is the day after or the day after, when we can pile those shredded shards of bird on sandwiches or put them in soup or chili or whatever – n anything, really, except the good old turkey all by itself. Which is fine, and come to think of it, it’s just as much a part of the tradition as roasting the bird.

Like every year, I will ride with it. As I am too lazy to prepare an entire Thanksgiving meal myself, I will happily feast on what has been prepared and appreciate it with gratitude. That’s the point of vacations anyway, right? To sit with family or friends, savor the moment and the incredible good fortune we have to eat and drink with people who love us. If the turkey isn’t good – and it probably won’t be; I can accept that – I’ll just stock up on greens, mac and cheese, and oh yeah, that good old canned cranberry sauce and focus on what’s important: the people I’m with. Even though I chew until my jaws get sore, give up, and swallow the meat whole, doing it with my favorite people is a tradition I wouldn’t trade for anything.

Why Turkey is a Global Hair Transplant Phenomenon

Thanksgiving weather will be dry, but hopefully it won’t be your turkey