The Isle of Anglesey off the northwest coast of Wales is a peaceful place. Very few tourists stray that far, as there are very few attractions. It has an important history, however, Anglesey – or Ynys Môn as it is known in Welsh – was once a center of Druidic culture and for many centuries served as a place of refuge for Celtic high priests. Many myths surrounding this period survive to this day. One place in particular looks like a relic from that era. Llanfairpwllgwyngyllgogerychwyrndrobwllllantysiliogogogoch is the name of the village of 3,000 inhabitants in the southeast of the island. Translated into English, it means: The Church of Mary in the Hollow of the White Hazel by the Fierce Whirlwind and the Church of Tysilio by the Red Grotto.

Traveling from the Welsh mainland across the Menai Suspension Bridge to Anglesey, you first reach the place with the island’s most unusual name.

With 58 letters, it is the longest one-word place name in Europe. Pronouncing it correctly is an almost impossible task for non-Welsh speakers, and even those who live on the island simply call the village “Llanfairpwll” for convenience. But if you suspect it might be a legacy of the Celts, you’re wrong. The almost unpronounceable name is actually a very recent invention. The village is connected to the railway network in the middle of the 19th century. Craftsmen and traders settled there, but business was slow. An ingenious tailor invented the tongue twister in order to make the place more interesting. His creative strategy worked, the Welsh village became well known throughout the UK and attracted increasing numbers of visitors. 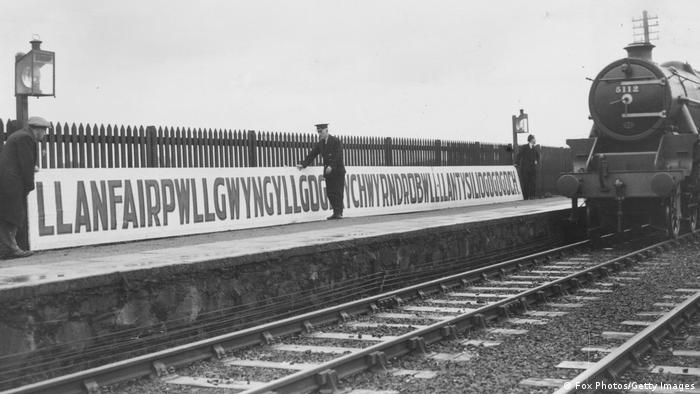 Llanfairpwllgwyngyllgogerychwyrndrobwllllantysiliogogoch railway station opened in 1848. Visitors soon began to come to the town due to its unusual name.

Today, people are still drawn to the village because of its unusual name, with the station sign being a popular image for tourist photos. And with its tongue twister, Llanfairpwll even secured an entry into the Guinness Book of World Records in 2002: for the world’s longest single-word Internet domain name.

Reason enough for DW reporter Hendrik Welling to pay the location a visit. For the series “Europe to the Maxx” of the lifestyle and culture magazine “Euromaxx”, he explores superlatives throughout Europe. In Llanfairpwll he asked the locals to tell him the story behind the crazy collection of letters and, of course, practiced a bit of Welsh. Find out in our video if, with their help, he finally managed to correctly pronounce the full name of the place!

Getting There : From Liverpool or Manchester, you can reach Llanfairpwll in around 3.5 hours by train.

Special tip: Plas Newydd, the estate of the Marquess of Anglesey, is also worth a visit. The late medieval mansion is located just outside the village and houses several exhibitions.

Europe to the extreme: the “Europe to the Maxx” series on DW’s lifestyle and culture magazine Euromaxx makes the superlatives of Europe accessible – from extraordinary architecture to spectacular landscapes to unique cultural phenomena. Accompanying the series, the book 111 Extreme Places in Europe You Shouldn’t Miss was published in collaboration with Emons Verlag. This is an informative yet entertaining alternative travel guide for avid travellers, Europe fans and anyone who likes to show off with unusual pub quizzes. It is full of guaranteed records!