[Warning: The below contains spoilers for Season 6, Episode 11 of Riverdale, “Chapter One Hundred and Six: Angels in America.” If you don’t want to be spoiled, maybe go Google “transtemporal” and come back later.]

Like Bill & Ted with a social conscience, Riverdale revisited key moments in black history tonight, through the eyes of Tabitha Tate (Erinn Westbrook). As the supernatural season unfolded, it was revealed that various townspeople with Dynamism were developing powers and it turns out that Tab is now one of them. His gift: Time travel.

Prompted by an assassination attempt by a goon working for Percival Pickens (Chris O’Shea), the possibly Evil-with-a-capital-E real estate developer who wants to demolish Pop’s, Tabitha finds herself jumping from 1944 to 1968 to 1999. In each era, she witnesses racial injustice, hatred, and oppression, while receiving guidance from a series of angelic counselors. Yes, it was crazy, but it was also a beautifully handled exploration of how, even in a fictional location, hate has caused real tragedy.

Here, Westbrook walks us through the episode’s production and its eye-opening potential.

OK, so first I need to know: did they train you at Harvard to react to lines like, “Your brain is going to split in two and your eyes are going to start bleeding”?

Erin Westbrook: [Laughs] Unfortunately no! This is such a fun question. These lines, they sometimes take you by surprise.

Yes, it was not at all what I expected. And that was after hearing Jughead (Cole Sprouse) say, “Oh, I’m an angel.” As of course you are, Jug!

‘Cause why wouldn’t you be, right? [Laughs]

The show got so crazy and it looks like you came just when it was embracing this.

Yes. And I was in. Yeah. And I’m still up for that ride. It is definitely an adventure. And they threw me in. Inside ! It’s like Tabitha’s been here all this time.

You got one of the easiest costume situations…it’s just a Pop waitress uniform for so many scenes.

I know. I will ask Roberto Aquirre-Sacasa [the showrunner] if I can grab one of the waitress outfits when we’re packing. I have several because of course, you know, you need several different outfits in case something happens to one of them. So I’m definitely going to take one at the end of this trip, because that’s, that’s what Tabitha lives in. 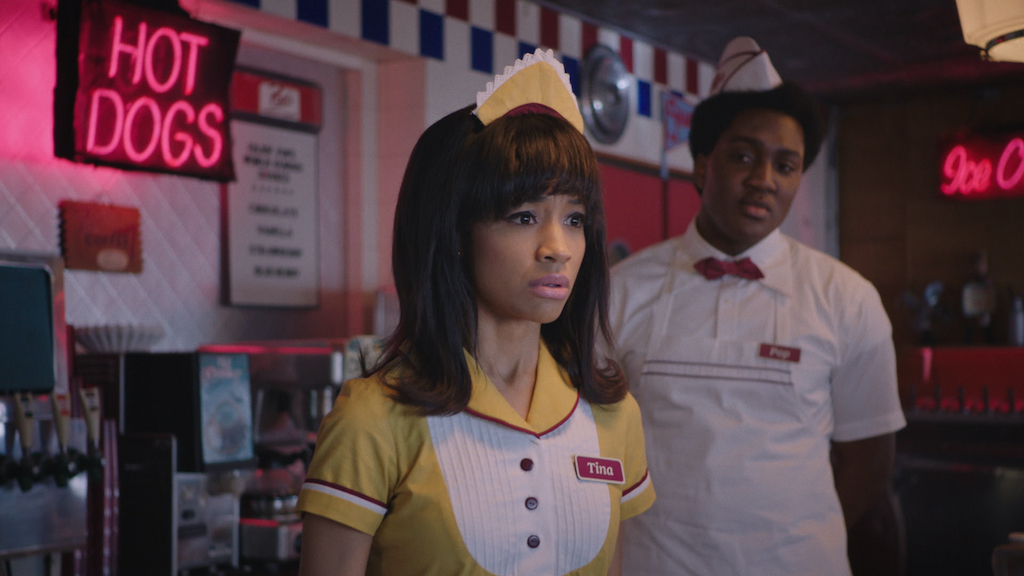 Nice. Now, this is a big episode, and speaking of costumes… who kept track of all the looks you had to adopt for this episode?

It was the hair and makeup, the assistant directors and myself. I feel like it was a real collaboration because there were a lot of moving parts. We tried very hard to have days where I would be just in the 40s look or just in the 60s. But you know, it didn’t always work out that way, so there were times when I I had to switch between, say, the 40s and the 90s. And it required like braiding my hair, it was a whole thing. But it was a lot of fun and it went really well. I looked at him and we didn’t miss a look.

We’re going to air that after the episode, so I want us to be able to talk about what people just saw. First, making Pop’s a Green Book entry (an age of segregation travel guide that lists businesses that accept African-American customers) is such a smart idea because racing in Riverdale is very rarely addressed.

Alright Alright. And you know, that was one of the things that I loved so much about that episode. Throughout the episode, we see that Tabitha is a time traveler, we see her time jump, we see her fight Percival. But then we also see her and we see the story confront the very real issues of racism and racial tensions through time. I was really excited and proud that we didn’t ignore those issues, because when you have a character like Tabitha Tate, who was an African-American time-traveling woman, you can’t just ignore that those things were happening. Something like the Green Book would have existed and Pop’s would have been included, given his legacy. Obviously we didn’t have enough time in an hour-long episode to do a real deep historical dive, but you hear about the green book, you hear about cities at sunset [all-white communities that either formally or informally kept out African Americans or other minorities].

And you know, we talk about Martin Luther King and we see when people find out that he was assassinated. So there are times, Major moments, which we hope will spark conversations or at least get people thinking.

It’s interesting because, while yes, these things are in the history books, they may not be events or experiences some of the Riverdale the public would know. Like cities at sunset.

I think that’s such a good point, really. My hope is that they hear the phrase “city at sunset” and think, “What is that? And you know, we all have our phones and everyone’s very connected, so hopefully they’ll look it up and realize, ‘Wow, that was awful.’ And watching Tabitha or a character from one of your favorite shows and seeing that it’s something that she deals with, this issue, I think is impactful.

It’s very impactful because you realize that it wasn’t that long ago.

To the right. This was not the case. I think it will start conversations, that’s my hope. And again, I am grateful. I think the writer of the episode, Evan Kyle, who is African American, and Roberto and the rest of the team did a really great job of including those references and conveying the importance of those moments in the weather.

In the midst of these very real historical events, we have the fantastic… as you mentioned, Tabitha is a time traveler! When did you learn that you received powers?

[Laughs] I discovered that I was getting powers when I received the script for this episode, “Angels in America”. I literally found out the moment everyone did, at least among the cast and crew. But that’s kind of how things work on this show, you know? You find out at the last minute, roll up your sleeves and can’t wait to do it. And I was really thrilled…I think Tabitha has one of the coolest gifts. I mean, who wouldn’t want to jump back in time? It’s very convenient and you’ll see him play quite a bit throughout the season.

Good, because I want to know if she can love, come back in season 2 and witness something she wasn’t there for, you know?

That’s a great question! You would think she could, she certainly is capable of doing it. But we will have to see. In terms of all the gifts we everything have, they will definitely play a role. The hope is that we somehow combine these gifts and powers to protect not only Pop’s – which is Tabitha’s main concern – but also Riverdale, which is obviously another big priority. And that’s the thing, we’re protecting our city from this evil force and this antagonist Percival Pickens, so there’s a reason for all our powers.

When do we find out what its endgame is? Or is it the clue at the end of this episode? Like, does he plan to bring about the apocalypse?

In this episode you see Tabitha saying that she saw the future and it was apocalyptic. And so it is a reality. She doesn’t know, none of them know if it’s for sure, but they’re going to do everything in their power to make sure it doesn’t happen. We’re still filming, so guess what? I really don’t even know. [Laughs] I’m like, “OK, what is will it happen? “We receive all our scripts the week before filming them and therefore everything, all the twists, we find out, just before shooting them. We still have a few more episodes to film and I’m excited to see how it all pans out as well.